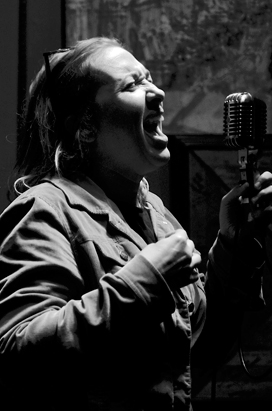 Shotgun Jazz Band had its humble beginnings as the street-performing duo of Marla and John Dixon. In the early days, their only goal in mind was to spend a few nice afternoons in the French Market, playing songs they’d learned from old records of Billie & DeDe Pierce, George Lewis, and Kid Thomas Valentine. Having discovered this music several years prior, Marla and John had become enamored with the rough-and-ready approach of those bands, coupled with the beautiful simplicity of the songs.

Marla had previously led Traditional New Orleans Jazz-style bands in Toronto, and John, after spending years playing country and southern rock, traded his electric guitar for a Danny Barker-style six-string banjo. The unassuming busking duo soon attracted the attention of like-minded musicians, local clubs, and most importantly, fans. Five years, and as many albums later, the mission of the band is pretty much the same: share the music they love and see how it goes.

Having paid their dues on the street and proven themselves in the clubs, Shotgun Jazz Band now enjoys three weekly residencies: The Spotted Cat, Three Muses, and Maison Frenchmen. Their 2014 release, Yearning, was voted #8 by Offbeat Magazine in the “Top 50 Louisiana Album Releases of 2014” and the same year was also nominated for the Best of the Beat’s “Best Traditional Jazz Album.” Internationally-renowned journalist Stephen Steinberg summed it up best: “Gutsy, gritty and grabbing… straight-ahead New Orleans jazz of the first order—no tricks or gimmicks here.”

Instead of meticulously recreating the approach of a specific band or era, Shotgun has simply kept true to a few guiding principles: bluesy, no-nonsense melodies, old New Orleans-style ensemble playing, a stomping rhythm section, and the abiding belief that New Orleans Jazz is essentially party music and as such, playing and listening to it should be fun. Also, it doesn’t hurt to have one of New Orleans’ strongest vocalists, Marla Dixon, leading the charge. With these basic tenets in mind, the band has developed a style that’s immediate in its influences, yet uniquely their own.