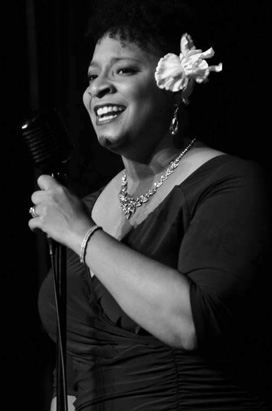 Born in Memphis and raised in Atlanta, Taryn is rooted deeply in the soil of a rich musical heritage.

Born in Memphis and raised in Atlanta, vocalist Taryn Newborne is rooted deeply in the soil of a rich musical heritage. She has often said that she loves music so much, it hurts her feelings. After years of dancing in her local Lindy Hop scene, one of the major organizers suggested that Taryn put her own group together for dances. That’s her band Taryn Newborne and The Real Deal was formed. She’d finally found her home, situated between her love of singing and Lindy Hop. Since becoming a regular in her home scene, Taryn has had the opportunity to make guest appearances with Falty and the Defects, Ben Polcer, Jonathan Stout, Gordon Webster and Michael Gamble. Wherever she is, Taryn Newborne strives to swing as hard as possible!